Jeff and I had dinner last night at Ate-oh-ate on Burnside. I am from Oahu and, as far as I’m concerned, an expert with regard to plate lunches. This was not impressive.

Let’s start with the food, since it is the essence of a restaurant. They purport to be a “Hawaiian-Style” establishment, so I can’t skewer them too severely. They are not claiming to be authentic. In fact, “authentic” might be a bad word to use with regard to plate lunch because, after all, a plate lunch is really a mash-up of many cultural flavors. However, much of the food is not…authentic. In a way it is too good to be authentic. The mac salad has too much going on. That is the opposite of a good Japanese-Hawaiian style mac salad. Mayo, a little shredded carrot and the essence of a Japanese tabi, as my grandfather used to say. That kind of mac salad is the holy grail of plate lunch. This salad was ok, although a little under seasoned, but it had something else in it that was wrong. Maybe it was a little tuna or some finely chopped cabbage, not sure, but for the first time in perhaps my entire life I left some salad on the plate. One of my friends just gasped.

I ordered “Japanese style” curry. First, it was not Japanese style–it was Thai style, with too much coconut and a distinct flavor of lemon grass. Second, they did not understand my request to put the curry, rice and mac salad all on the same plate. Once I got the food it made sense. The curry was more soupy than Japanese style curry so it really could not be on a plate but had to be in a bowl. That meant I could not have the quintessential plate lunch experience of the curry and the rice and the salad all touching each other and–can I say out loud–mingling on the same plate. On a positive note, the chicken katsu was excellent.

Jeff had fried saimin, which is yakisoba by another name. This is not an uncommon dish but, in my opinion, they messed it up with upscale ingredients. Jeff is not fond of pork belly (I know, crazy but stay with me). It’s too fatty for his taste. Frankly, I didn’t like it either in this dish. Usually it is Chinese bbq pork, which is leaner than pork belly, and is cut into thin slices. The distinct, sweet flavor of Chinese bbq pork lends itself better to this preparation. Pork belly, though delicious, seems out of place to me, as it vies for attention in the mix instead of playing along, like a good plate lunch food should.

Perhaps most importantly the place was cold and without aloha. I know, “aloha” is a difficult quality to define but when it is missing a local person knows it. High ceilings, minimal decoration and the constant drone of “Jawaiian” music did not make for a good atmosphere. Now, I know that Jawaiian is a legit category of Hawaiian music but I contend it is crap and just the over-influence of hippies high on ganga. Sorry, my opinion. When I go into a Hawaiian establishment I expect to hear the greats of Hawaiian music like Gabby Pahinui, Genoa Keawe, Cazimero Brothers, Iz and so on.

My advice: Stop trying to be what you think mainlanders think Hawaii is all about and go back to roots. Make the food the way it is remembered and loved, play a variety of Hawaiian music in addition to a little Jawaiian, bring in some people with some aloha and warm up the decor. You may find that this appeals to everyone.

I might stop in again in the Summer, when a cold restaurant feels good but, at the moment, I can make my own katsu and Japanese curry and mac salad. Ok, the mac salad is a work in progress but I have connections in the meantime. 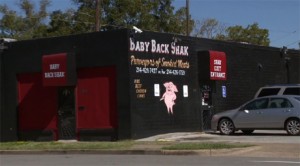 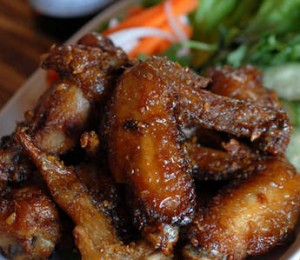 It seems that everyone in Portland is gaga over Pok Pok’s “street Thai” food so Jeff and I decided to check it out on date night two Fridays ago. For a short, video description of Thai food see the interview with food critic and author David Thompson.

To begin with I’ll say I really like the place–physically. There is a lot of outdoor space and even in the rain we were warm and dry. Also, we were there early enough that we did not have to contend with the long wait they are known for. I have also read comments about the wait staff being rude. We thought everyone was very nice and informative.

Now, before I describe the food, I have to say that I did not imagine Northern Thai “street food” could be that expensive. We had a drink while waiting for our table and another during dinner. When we were seated the waiter told us the dishes are small and intended to be shared, which is typical of this branch of Thai cuisine. If you know us you know that I am not a small man and Jeff, though he is slim, is tall and can eat much more than I. We were hungry and both had a drink in us so we asked for appetizers. There were only two on the menu: a small bowl of spiced, roasted peanuts and some shrimp chips, so we had both. They were inexpensive ($2 each) so not a budget buster. They were, however, a waste of time. I have had better shrimp chips (in pink even) from Longs Drugs in Hilo. I suppose if you were really eating Thai on the street you would not be waiting so an appetizer would be unnecessary. We ordered four (small) dishes which were as small as promised. So, if you are adding things up, four drinks, two appetizers, four dishes and one sticky rice. The bill came to $83. Seems contrary to the common understanding of street food.

Now about the food. Good Thai food, particularly of the street variety, is spicy hot with chilies. I expected that. But this food was volcanic. Even Jeff thought one or two dishes were too spicy hot and he loves this in Asian food. When I saw in a few reviews that people complained the food was too hot I thought to myself “weaklings”. Personally, I like food with flavor and if the spice adds to the flavor of the food then I’m for it. I think, however, that some people have grown to equate spicy hot with tasty and I cannot agree. The Muu Paa Kham Waan (grilled boar collar meat) was so piquant it was almost a chore to eat. It could have been any kind of meat and I would not have known. I do not recall a bit of flavor. We even left a large prawn on the plate, much to the surprise of the waiter, because we both could not endure another bite. I have since learned that overly spicy hot food actually discourages the appetite and my experience now confirms it.

It was also distracting to have prawns that were completely whole, with shells and all. Cooking in the shell did not preserve any flavor or moistness, in fact, it kept the flavor that was to be imbued through whatever marinade or sauce was used during cooking from getting to the edible flesh of the prawn. I have had prawns this way many times in my life and I might have enjoyed them that night if the shell had produced something unique or if I were not distracted by drinking everything on the table to preserve my lips.

I love sticky rice in all forms. It came in a cute little rice basket wrapped in plastic wrap which I understand is standard practice but . . . I prefer my sticky rice wrapped in a leaf on a flat plate. It’s easier to grab. My recommendation is that you should have at least one order of sticky rice per person.

Our final opinion: We might go to the take out window sometime and grab something to go so that we can taste some of the other dishes but we have no plans to spend an evening there again. It was expensive, too spicy hot and overall just a little over impressed with itself.