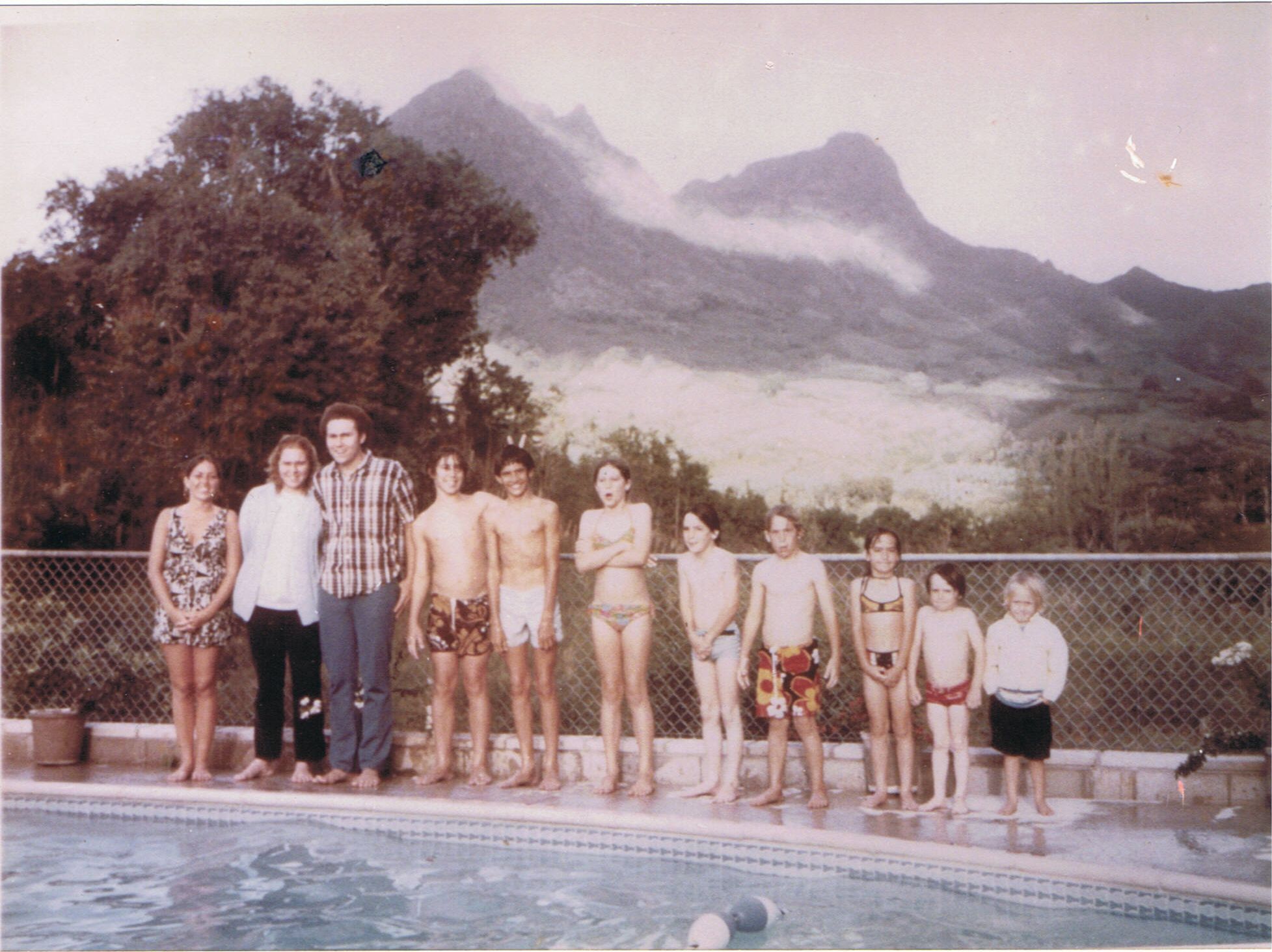 I had a dream last night about my Aunty Marilyn. For some reason I didn’t see anyone else in this dream, just Aunty Marilyn, but I knew there were other family members there. We were all helping her pack up the house so she could move. That house on Lunaai Street in Kailua holds a lot of memories. One of my favorite pictures of my brothers and sisters and cousins was taken on the far side of the pool, Mt. Olomana in the background, each of us organized by age. My Uncle Jack took this picture, along with who knows how many thousands of others. We were always saying “Uncle Jack! Not another picture!” Now, of course, each one is precious. Even more so now since Uncle Jack passed away this year.

Anyway, I woke up crying. It felt like Aunty Marilyn was moving away from but I didn’t know where to. The feeling of my family getting dim in my mind’s eye, like fading old pictures, made me quite sad. I miss them. All my old aunties, sitting on the back seat of The Bus, dressed up in their muu muus, hats, bandanas and shell purses. They would see me get on the bus, probably leaving Community College, and shout “Stevie! Stevie! E nei!” The many, many family dinners at the house on Lunaai, or at our house on Hui Kelu, or at the beach. Spending time with my dear cousin Laurie and getting the drama bug from her and my sister, Eve. Braving King Intermediate with my dear friend, Peter Jones (who I owe an email–Peter, I didn’t forget). You get the picture. I’m having one of those bittersweet moments.

This holiday season (whatever you want to call it) take my advice. Enjoy every moment. Even the ones where someone has a little too much to drink and starts singing “Stormy Weather” with great gusto. Oh, and don’t miss the ones where the two old aunties break out an ukulele and tissue paper and comb and bust into a hilarious rendition of “Meleana E”. This year I’m planning to make new memories but I know the old will be with me always.

A little over 10 years ago I started a new job at a fairly small startup software company in my wonderful Portland, Oregon. The day I was hired nine people were laid off. I remember thinking . . . yikes. There were a lot of struggles as the company tried to figure out how to fire the assholes and keep the good ones.

My office (sort of cube actually) was very near a play room containing a pool table, chess board, pinball machine, guitar, leather couch and a huge flat screen TV with a bunch of popular video games. People would drop into that room for fun whenever they needed a break. I remember hearing guitar almost every afternoon. At lunch the couch was a popular spot where gamers would gather and compete with people in another conference room at a large screen TV there. At times I was irritated because I’m one of those people who works best in silence but still…it made me feel good to hear multiple renditions of Stairway to Heaven on a daily basis.

We had some great traditions, like themed release parties. When a new software version was ready to release a party would be held with a theme. So, for example, if the theme was “South of the Border” there would be a margarita bar. Those days it was not unusual to see someone with a beer on their desk while the party wound down. There was also this tradition built around a mystery person named Dr. Fun. The Doctor was an unnamed person who was responsible to–every so often–find a way to spend a little company money to create a fun event for people to attend. Just because.

Well, those days steadily disappeared as we became a larger and more responsible organization. No more rec rooms, no more themed parties with alcoholic drinks, no more Dr. Fun. The company has tried to keep the feeling that used to be there but it is really not possible. A drink ticket is a cold remnant of a warmer occasion and no matter how much I want to get into the new “recess” I just don’t like it. The whole metaphor of controlled play bugs the hell out of me and, frankly, the frantically happy announcements about an upcoming “recess” sound so fake and condescending I am just too rebellious to attend.

Today I attended what felt like a funeral. A week ago we learned that the company had been purchased by a large, Public Equity firm. As a part of the metamorphasis many people were released from their jobs today–people who had worked for the company for almost 10 years–people who knew Dr. Fun personally. The meeting to discuss the restructuring felt more like a funeral than a business meeting. I attended by phone and even I had a tear in my eye and a very sad heart.

I’m not saying that I think the choice to become part of this huge PE firm was a bad choice. It may be the best business decision we have made in some time. Time will tell. What I am saying is I am sad. I miss my old friends, the ones that made me feel so comfortable when I was the youngster, the ones I drank a little too much with at company parties, standing on the cold upper deck of a riverboat, the rain in our faces. The ones with whom I stood in a very long line full of colorful characters to watch a matinee of The Lord of the Rings. Thanks Dr. Fun. Rest in peace. I will miss you.